I am a geophysicist, and I study mantle dynamics and the structure of the lithosphere. I am currently a Postdoctoral Investigator at the Woods Hole Oceanographic Institution.

My research is focused on how Earth's mantle flows, cools, and evolves over geologic time. I'm interested in how tectonic plates, particularly oceanic plates, are shaped by these dynamic processes both at and away from plate boundaries. I explore the structure of the lithosphere and asthenosphere primarily using seismic data (both active and passive), with some forays into geodynamic modeling and lab experiments. Below are a few current and past projects: 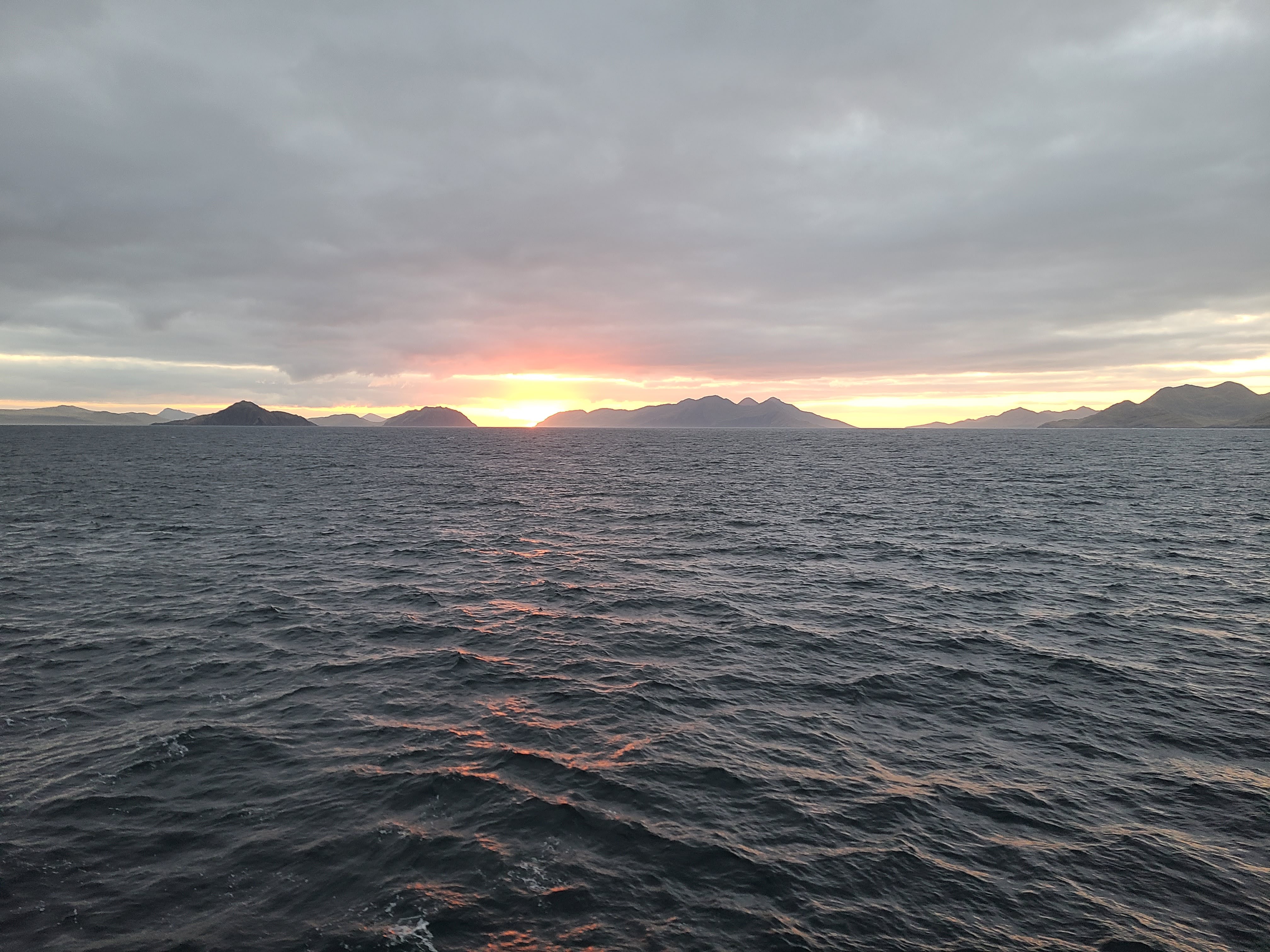 How is continental crust made? Crustal structure and magma transport in the central Aleutians

At the present time in Earth's history, new continental material is made in oceanic arcs. The central Aleutian arc is relatively intact and unrifted, making it an ideal setting to study how new continental crust is built. The Aleutians also exhibit distinct geochemical trends in arc lavas along strike, suggesting that magmatic pathways and processing vary along the arc. In October of 2020, we collected active-source marine seismic data (reflection and refraction) along and across the Andreanof Segment of the Aleutians. Seismic velocity models derived from this data, combined with geochemical modeling and literature data, will be used to explore the structure of the arc crust and how it varies along-strike.

Faults or fabric? Azimuthal anisotropy near the Mariana trench

Azimuthal seismic anisotropy in undisturbed oceanic lithosphere is primarily attributed to crystal-preferred orientation of olivine set during plate formation. As an oceanic plate bends into a trench, outer rise faulting introduces an additional extrinsic source of anisotropy in the crust and uppermost mantle. Changes in anisotropy as a function of distance from the trench may therefore be linked to faulting and, by extension, plate hydration. I am using active-source refraction data collected over the incoming plate in central Mariana to investigate azimuthal anisotropy. Spatial variations in the strength and orientation of anisotropy, combined with insights from surface wave tomography and isotropic body wave tomography in previous studies, will provide insights into faulting and water input to the Mariana subduction zone. 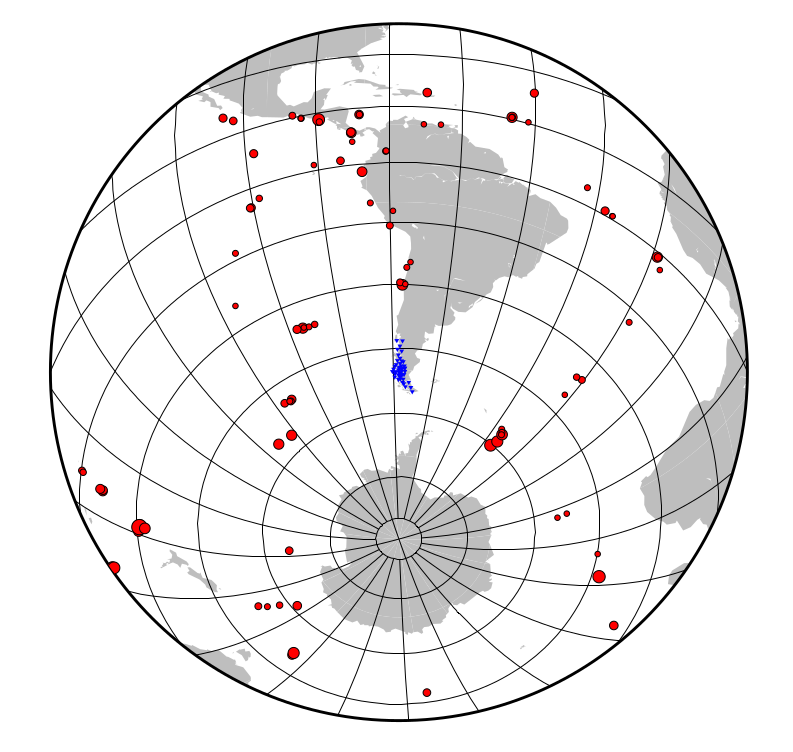 Seismic structure and the slab window beneath Patagonia

Subduction of the Chile Ridge and northward migration of the Nazca-Antarctica-South America triple junction over the past 16 Myr have formed a slab window beneath Patagonia. The geometry of the window has important implications for glacial isostatic adjustment (GIA) across the Northern and Southern Patagonia icefields, as thinner lithosphere and lower mantle viscosity associated with the slab window perturbation are expected to enhance the solid earth response to glacial unloading. As part of the GUANACO team, I am using ambient noise and teleseismic earthquake data to obtain a new regional seismic velocity model for Patagonia and constrain the extent of the slab window. This model will feed into modeling efforts to better understand GIA and the factors contributing to rapid geodetic uplift in Patagonia. 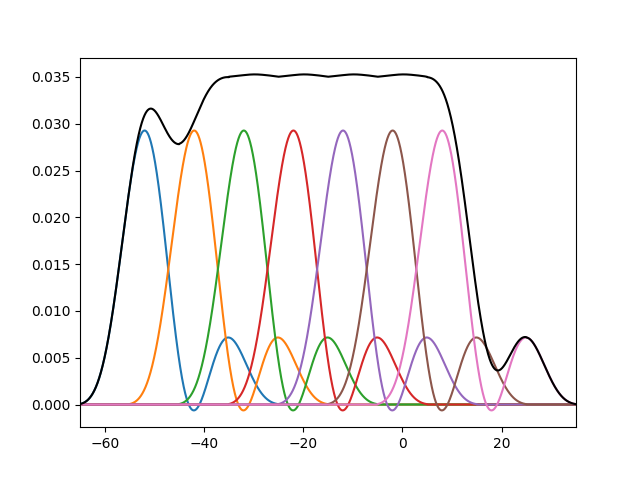 The oceanic LAB in the central Pacific

The mechanical contrast between the rigid lithosphere and ductile asthenosphere is a key feature of plate tectonics, but the nature of the lithosphere-asthenosphere boundary (LAB) remains poorly understood. Receiver function techniques can be used to image upper mantle seismic discontinuities such as the Gutenberg or G discontinuity, which is potentially associated with the oceanic LAB. Applying receiver function techniques to marine seismic data presents particular challenges: data is sparse, and noise in the marine environment severely limits the usable frequencies. We are using S-to-P receiver functions and extended-time multitaper methods to study the oceanic upper mantle beneath the NoMelt array. You can read more about this work in a journal article here. 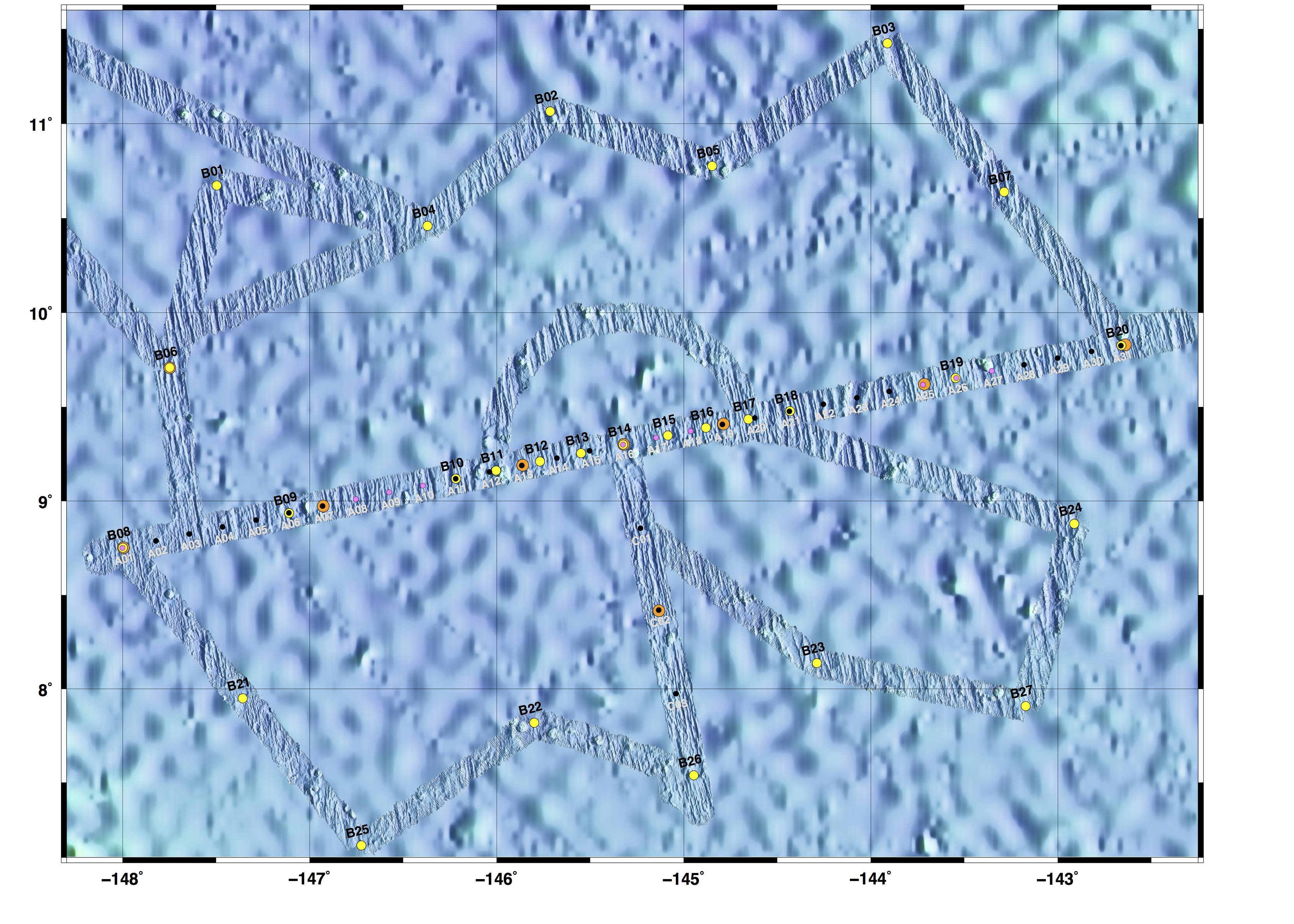 Mantle corner flow beneath mid-ocean ridges is expected to align olivine crystals in the upper mantle into a coherent fabric, thereby making the oceanic upper mantle seismically anisotropic. Seismic refraction data from the NoMelt OBS array in the central Pacific provide constraints on azimuthal anisotropy in 70 Ma, relatively undisturbed oceanic lithosphere. Further, the data indicate that there are anisotropic vertical velocity gradients in the shallow mantle, suggesting that extrinsic sources of anisotropy (such as aligned cracks or other structures) are present. You can read more about this work here (in science language) or here (with a little less jargon).

Mid-ocean ridge normal faults slip both seismically and aseismically, and the ratio of seismic to aseismic slip has been observed to vary across plate spreading rates. We use rate-and-state friction models to simulate seismic cycles on normal faults and investigate controls on fault behavior that might produce these variations in fault behavior. Our models suggest that the partitioning of seismic and aseismic fault slip is controlled by fault geometry and thermal structure. More about this work can be found here. 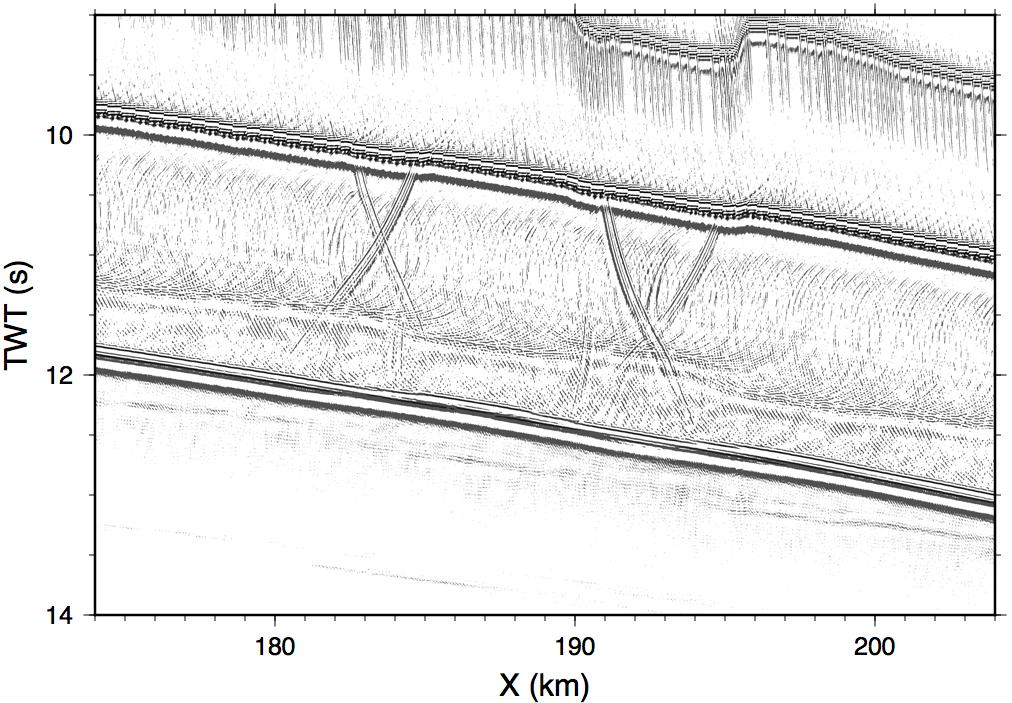 Lineations on the ocean floor are the surface expression of bending-related faults near subduction zones. Such faults, as permeable pathways for fluid flow, have implications for the fluid budgets of arc volcanoes. However, high angle faults are difficult to image using seismic reflection. Synthetic seismograms allow us to test whether we should be able to see such faults at depth in seismic images. 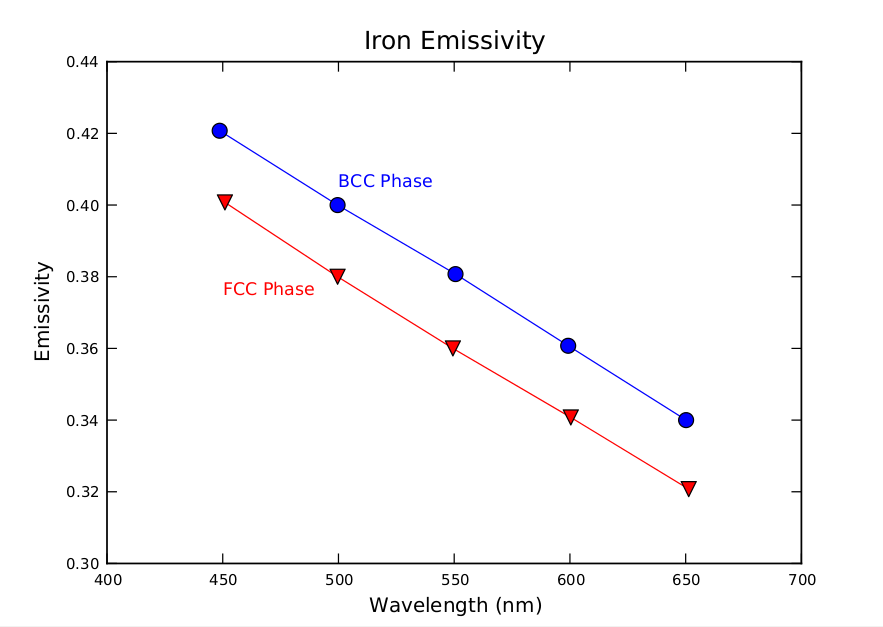 Temperatures of shock-compressed materials have been measured using spectral radiance. The wavelength dependence of emissivitiy must be taken into account for calculations of temperature from optical measurements. Reanalyzing the data of Bass et al. [1987] with wavelength-dependent emissivity gives a high-pressure melting temperature for iron that agrees with other experimental and theoretical results. This work was done with Dion Heinz at the University of Chicago.

As of 2020, I'm a contributing writer for Geobites, and you can find my posts here.

After a seismic research cruise on the R/V M. G. Langseth, I wrote a blog post about life at sea for the EGU seismology section blog: 39 days aboard the Langseth.

A general-audience view of a chunk of my thesis research can be found in the 2018 student issue of Oceanus: How is the seafloor made?

I wrote a blog post for AGU's science policy blog, The Bridge, as a student volunteer at the 2018 Fall Meeting, which you can read here: What does it mean for Science to "stand for" something?

If you're more into audio than written text, I told a science-y tale at the Story Collider show at AGU in 2017 which you can listen to over here.

I also wrote a few short pieces for my graduate program's student blog:

You can occasionally find me writing even shorter science-related things on twitter @tellurianite.

Research occupies the vast majority of my time, but even postdocs occasionally do things other than read papers and debug code. I imagine that it would be difficult to stay sane without some hobbies. Mine have, at various times, included running, quilting, playing carillon, librarian-ing, and choral singing. I'm always happy to talk about patchwork, bells, Renaissance choral music, or the merits of the Dewey Decimal system.